Sedona is world famous for its red rocks and its scenery serves as the major draw in attracting visitors and residents. These rocks, exposed in the walls of the Mogollon Rim and the buttes that dot the city’s skyline, as well as those found in Red Rock State Park, tell a fascinating story of the ancient environments that once existed here. The rocks may stand in apparent silence today but speak plainly about their origins hundreds of millions of years ago.

When all of Earth’s continents were beginning to assemble into a supercontinent called Pangaea around 280 million years ago, western North America and the future Sedona area lay on the arid, western edge of this giant landmass (modern coordinates used throughout). Rivers from the eroding Appalachian Mountains brought sandy sediment down to broad floodplains that were present in modern day Montana and Wyoming. Here the river water was evaporated or seeped into the sandy ground and it was from these dry riverbeds that northern winds carried sand grains to the south toward northern Arizona. Low-slung coastal dunes developed here and stretched for miles in all directions. It was in this setting that many of Sedona’s red rocks were deposited, and today are called the Schnebly Hill Formation. In the last 40 years, more details regarding this setting have been uncovered. 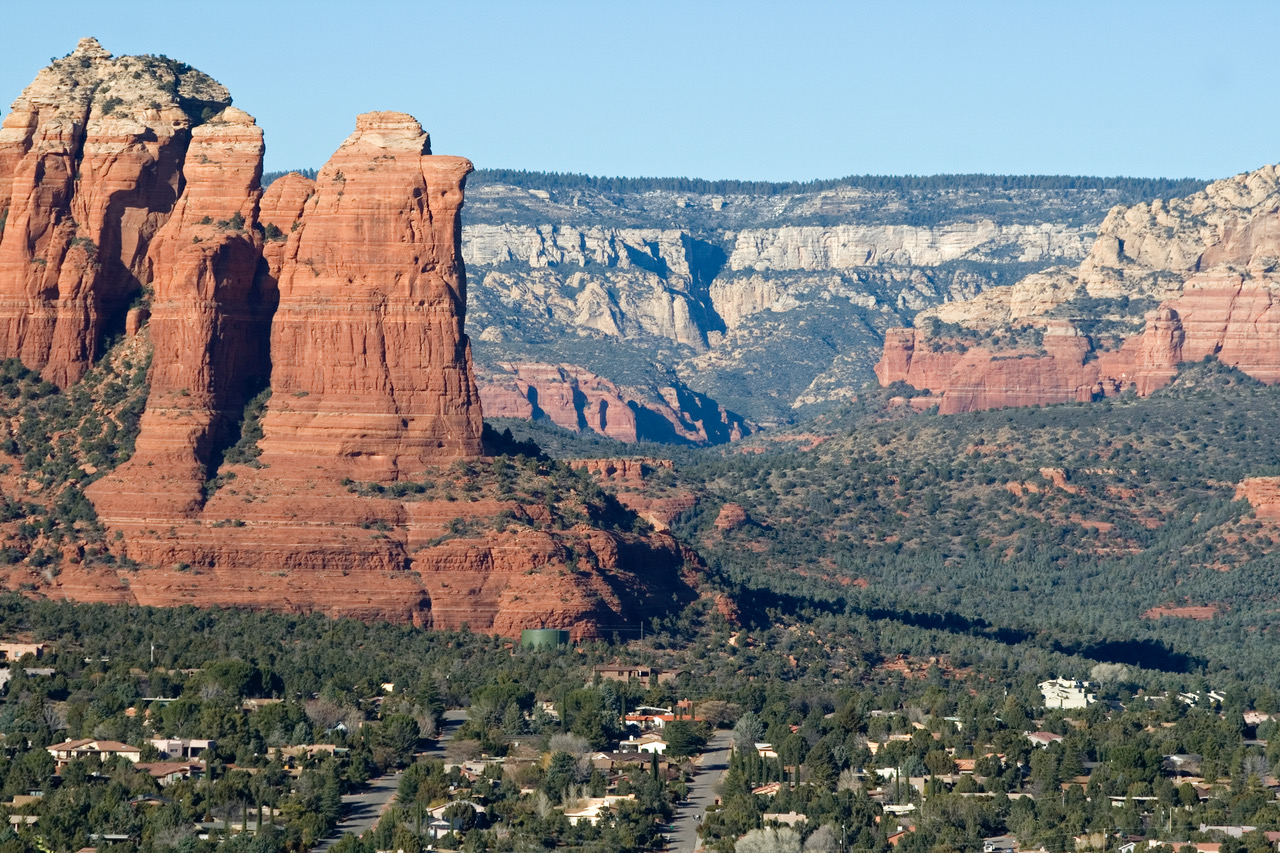 View of Sedona’s red rocks from Airport Mesa. The red Schnebly Hill Formation is visible in the left foreground. Other higher layers can be seen in the distance in the Mogollon Rim.
Photo by Wayne Ranney

Far away to the south in southeastern Arizona, exposed limestone rocks that are the same age as Sedona’s red rocks, reveal the location of the warm, shallow Pedregosa Sea. Through time as the land around Sedona subsided, a northern arm of the sea expanded and gradually inundated the Sedona area. The wide-ranging and shifting tides along the shoreline washed over and flattened the coastal dunes into horizontal layers called the Bell Rock Member of the Schnebly Hill Formation. Seawater rose higher and ultimately covered the Sedona area for a geologic instant, leaving a thin layer (～10 feet) of limestone in its wake. Today, the gray Ft. Apache Member of the Schnebly Hill Formation is present within thick layers of red sandstone.

This seaway finally retreated southeast, and coastal dunes once again crept into the area from the northwest, leaving the Sycamore Pass Member of the Schnebly Hill Formation. All the while, as more sand entered the basin. the land was subsiding such that the rocks were progressively buried and preserved. Eventually, the shoreline was hundreds of miles away and inland dunes rather than coastal dunes became dominant. These inland dunes are preserved as the Coconino Sandstone and are the white layers of sandstone that cap many of the red rocks in this area.

After an intense summer rain, Oak Creek swells with run-off, carrying much sand, gravel, and boulders downstream. Events such as these are powerful agents of erosion, removing rocky debris that comes down from the cliffs above. Photo by Rob Harrison

Finally, between 275-270 million years ago, a different seaway came in, this time from the northwest. At first, salty mudflats were present which deposited the Toroweap Formation. As this sea moved eastward and flooded the area in seawater once again, it left a limestone layer called the Kaibab Formation. This is the rock layer that caps much of northern Arizona, including the Mogollon Rim and the Grand Canyon. This short synopsis describes how Sedona’s colorful rocks were made. However, more recent events have shaped and sculpted these rocks with a finishing flourish.

These more recent events begin only about 25 to 30 million years ago when the Mogollon Rim was formed by erosion. To the south, central and southern Arizona had been uplifted in a mountain range that geologists call the Mogollon Highlands. This event tilted the red rocks in the Sedona area and soon thereafter the colorful layers of rock were stripped back to the northeast by erosion, as if peeling the layers off of an onion. An early incarnation of the Verde Valley was formed between the uplifted terrain to the south and the newly formed Rim.

Beginning about 15 million years ago, volcanism commenced just south of Sedona with outpourings of voluminous basalt lava. This is when the rocks on top of Mingus Mountain (near Jerome) were formed, along with those at House Mountain, a shield volcano near the Village of Oak Creek. At House Mountain the lavas only flowed to the west, south, and east. Detailed mapping of this curious distribution revealed that lava was precluded from flowing to the north by the presence of partially eroded but high-standing red rock buttes or the Mogollon Rim. Those rocks have now been further eroded and stripped back to the northeast.

The Verde fault near Jerome further depressed the Verde Valley such that the Verde River became ponded into a freshwater lake. This lake stretched nearly 35 miles from below Camp Verde to Clarkdale and from Jerome to Sedona. Fossils of mosses, tree roots, and giant herbivores such as Stegomastodons have been recovered from the white limestone of the Verde Formation. The lake was ephemeral with wetter periods and lake expansion interspersed with dry periods and lake contraction. The basin was breached about 2.5 to 3 million years ago.

Meanwhile, in the future area of Oak Creek, a second period of basaltic volcanism began lasting from six to eight million years ago. These lava flows filled an ancient valley that extended from the Mogollon Rim into the Verde Valley. Some of these flows entered the Verde lake area and black basalt lava is found occasionally interbedded with the white Verde Formation. Today, Interstate 17 takes advantage of the ramp built upon these valley-descending lava flows.

Beginning sometime after six million years ago, the Oak Creek fault became active and ripped through the sedimentary and volcanic rocks. Snowmelt on the Plateau percolated into the rocks where groundwater found the fault zone an attractive place to flow in the subsurface toward the south. This groundwater flow weakened the rocks and facilitated more vigorous surface runoff. Acting in concert, these two processes likely helped to carve Oak Creek Canyon. It is amazing that this half-mile deep gorge is less than six million years old. 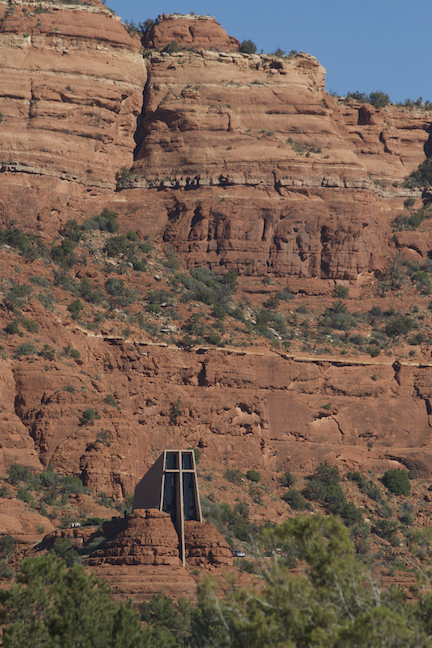 View of the Schnebly Hill Formation near Chapel Road in Sedona. Note the thin, gray Ft. Apache Member located within the red rocks at the bottom of the vertical crack that extends downward from the top of the cliff.
Photo by Wayne Ranney 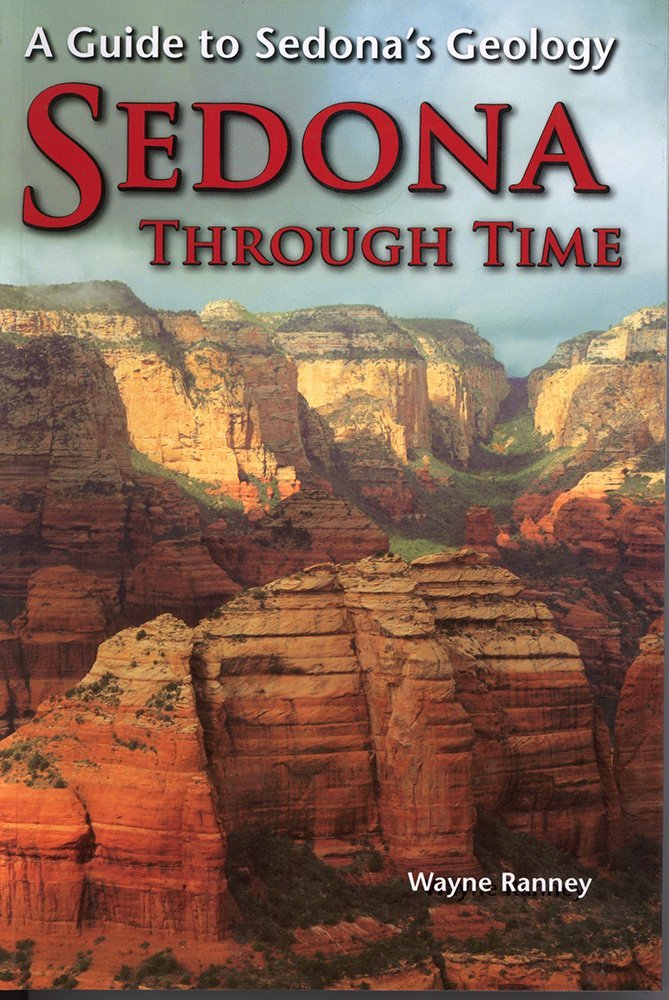 Learn more about the geologic events that created this world-renowned landscape. Buy “Sedona Through Time” at Amazon.

Today, millions of visitors and thousands of residents enjoy recreating among the scenery near Sedona. And while very few take the time to learn about these long-lost but spectacular events, geologic studies reveal this fascinating history. Thank you for visiting Red Rock State Park and being interested in Sedona’s geology! Happy Trails!

To learn more about Sedona’s geologic story, obtain a copy here of “Sedona Through Time” by Wayne Ranney.

You can also purchase a copy of “Sedona Through Time” by Wayne Ranney at the Miller Visitor Center at Red Rock State Park.